In my opinion, science can be flawed, but it is more trustworthy than opinions. In the following, my opinions are italicized. 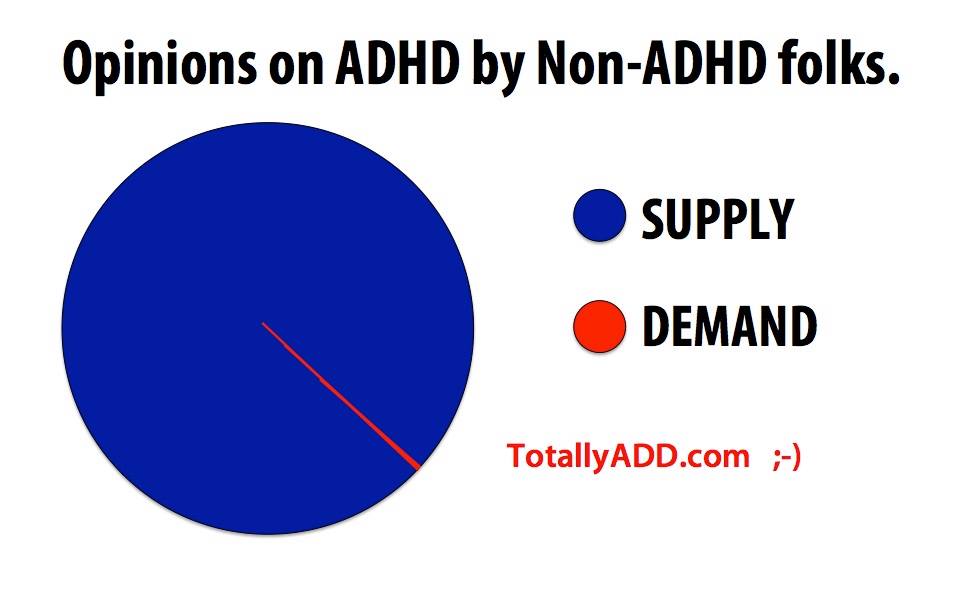 I wouldn’t be surprised if  there are more varieties of ADHD, beyond hyperactive, inattentive , and mixed.  Based on different sets of genes, and maybe other things.

2.  Studies show that stimulants do not help with studying in vanillas, just make the students think they did better on the test than they actually did.  But some recent studies show they do help.

Who knows?  I lean to the first concept, although that may be wishful thinking.

3. Some studies show that treatment with stimulants have no long term benefits for ADHD.

But clearly with ADHD we have more accidents, substance abuse, divorces, arrests, and these are reduced by stimulant.  The difference in percentage is very significant.  How could they not have long term benefit?  If you are alive, sober and not incarcerated, that seems pretty beneficial.

4.  Some studies are suggesting that a small percentage of ADHDers are adult onset.  But Further evaluation show that most of those people are having ADHD symptoms from other causes – substance abuse, traumatic brain damage, anxiety and stress, thyroid disease and others.

I think by definition ADHD starts at conception. It’s a  neurodevelopmental disorder.  Other factors may make it less severe or worse.  Sometimes the symptoms aren’t revealed until things get hard – I had obvious symptoms beginning in fourth grade, but had no scholastic difficulty until college, when I hit the wall.  I don’t believe in adult onset.  Some of this is semantic – if you have ADHD symptoms caused by thyroid disease, do you have ADHD?  I don’t think so.  And you probably wouldn’t meet carefully evaluated DSM criteria.

5. All the studies show that people who do have ADHD do not abuse their medication. But there is a lot of misuse, especially in college.  ADHDer are hit on by friends  to get their meds, or a few may be selling it.

There are surely some cases of abuse and addiction in ADHDers, especially with amphetamines, but these seem rare, and I question if the person really had ADHD in the first place.

Would you be willing to contribute your opinions?  They will make the site more interesting and I would appreciate them.

These two brilliant quotes are from Doug Puryear his own self.

I think this is one of my better posts, but we will have to wait and see what my wife comments, if she does.

I am a psychiatric physician. I learned I have ADHD at age 64, and then wrote two ADHD books for adults, focusing on strategies for making your life better. I just published my first novel, Alma Means Soul. Your Life Can Be Better; strategies for adults with ADD/ADHD available at amazon.com, or smashwords.com (for e books) Living Daily With Adult ADD or ADHD: 365 Tips O the Day ( e-book). This is one tip at a time, one page at a time, at your own pace. It's meant to last a year. As a child, I was a bully. Then there was a transformation. Now I am committed to helping people instead abusing them. The Bully was published in January, 2016. It's in print or e book, on Amazon.
View all posts by doug with ADHD →
This entry was posted in add, ADD problems or symptoms, ADHD problems, ADHD strategies, controversy, educate yourself, medication, medicine, research, science, stimulants and tagged @addstrategies, @adhdstrategies, @dougmkpdp, ADD, ADD problems, ADD symptoms, adderal, ADHD, adhd controversies, ADHD controversy, ADHD problems, ADHD symptoms, adult add, adult adhd, amphetamine, amphetamines, atomoxetine, attention deficit, buproprion, concerta, coping with ADD, coping with ADHD, daytrana, denial and ADHD, diagnosis, drugs, effects of diagnosis., facts about ADHD, guanfesin, ignorance about ADHD, life with ADHD, living with ADD, living with ADHD, medication, medicines, methylphenidate, myths about ADHD, Problems, research and ADHD.drugs, ritalin, science, science and ADHD, stimulants, strategies, strategy, strattera, symptoms, tips, vyvanse, Wellbutrin. Bookmark the permalink.