ADHD in Women is Different — ADHD Tip O the Day 964

ADHD in Women is Different (usually)

Most women and girls with ADHD have the inattentive type, ADHD without the hyperactivity.  The result is that as children they are less often diagnosed because they simply underperform instead of causing trouble, unlike the boys, who tend to have the mixed type, including hyperactivity.

Many women do not have symptoms that get attention until adulthood, when a change in the nature of responsibilities – jobs, motherhood, managing a household -begins to highlight their ADHD.

The treatment approaches to both male and female ADHD are  about the same.

Medical research, including on ADHD, has tended to be male focused for several reasons, some misogynistic and some practical.  Thus women have been short changed in getting the proper medical attention and treatment they deserve. (I will not object if this statement provokes some outraged comments.)

RSD is worse in women 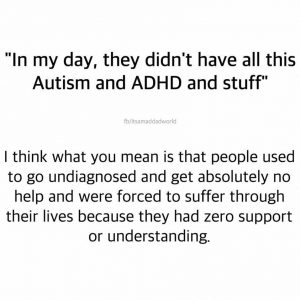 I am a psychiatric physician. I learned I have ADHD at age 64, and then wrote two ADHD books for adults, focusing on strategies for making your life better. I just published my first novel, Alma Means Soul. Your Life Can Be Better; strategies for adults with ADD/ADHD available at amazon.com, or smashwords.com (for e books) Living Daily With Adult ADD or ADHD: 365 Tips O the Day ( e-book). This is one tip at a time, one page at a time, at your own pace. It's meant to last a year. As a child, I was a bully. Then there was a transformation. Now I am committed to helping people instead abusing them. The Bully was published in January, 2016. It's in print or e book, on Amazon.
View all posts by doug with ADHD →
This entry was posted in add, ADD problems or symptoms, adhd, ADHD problems, adhd science, ADHD strategies, adhd studies, attitudes, diagnosis, medication, medication, medicine, medicine, research, science, strategies, studying and learning. Bookmark the permalink.