The Brake and the Accelerator — ADHD Tip O the Day 908

We have one amygdala deep in each side of the brain, a small group of nerve cells very involved with emotions.   The frontal lobe is a whole section of the brain, guess where?

The amygdala is connected to the frontal lobe, the brake, which is not always on, but when it is it says, “Hey, calm down, slow down.  Wait a minute.  Let’s think about this. What are the consequences, the pros and cons of this?” (Note the absence of !’s.)

Ideally, there’s a good connection and a balance between these two, but as we’ve been reading, not all of our ADHD connections, our networks, are in good shape.  This helps understand our impulsiveness.

Recent research says ADHD is about seventy percent heritable. Most cases come from a compilation of a large number of genes with common mutations; the more of these gene mutations  you have the more likely you’ll have ADHD and the more severe it’s likely to be.  Many of these genes are involved in regulating the early development of the brain, including the networks.

To better identify which genes are ADHD involved, the researchers looked at genes involved in the many different types of intellectual impairment (retardation), each of which is usually caused by a rare mutation in a single gene, very different from ADHD.

They found that many of the retardation genes are among those which (with common mutations) are involved in ADHD, and are especially involved in sleep disturbance and hyperactivity.

I think the significance of the gene study is that it specifically identified some of the many genes that contribute to ADHD and opened the door to studying their specific effects on the brain and thus on symptoms.

I plan to do posts on sleep problems and on which ADHD symptoms are not helped by medication. Any other requests or suggestions? 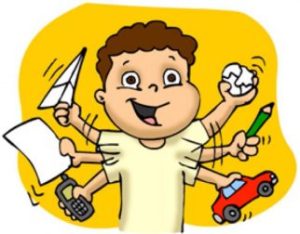 The Amygdala in Action

I am a psychiatric physician. I learned I have ADHD at age 64, and then wrote two ADHD books for adults, focusing on strategies for making your life better. Your Life Can Be Better; strategies for adults with ADD/ADHD available at amazon.com, or smashwords.com (for e books) Living Daily With Adult ADD or ADHD: 365 Tips O the Day ( e-book). This is one tip at a time, one page at a time, at your own pace. It's meant to last a year. As a child, I was a bully. Then there was a transformation. Now I am committed to helping people instead abusing them. The Bully was published in January, 2016. It's in print or e book, on Amazon.
View all posts by doug with ADHD →
This entry was posted in add, ADD problems or symptoms, adhd, educate yourself, research, science and tagged @addstrategies, @adhdstrategies, @dougmkpdp, ADD, ADD problems, ADD symptoms, ADHD, adhd brain, ADHD genes, ADHD genetics, ADHD problems, adhd research, ADHD symptoms, adult add, adult adhd, adult adult, attention, brain, deficit, disorder, maturing, maturity, networks, neurology, problem, Problems, science, symptoms, tips, Your Life Can Be Better. Bookmark the permalink.