This study is over my head, but I’m trying to summarize it as best I can.  For the many of you more astute than me, the link for the whole study is below.

Some genetic risk factors for psychiatric problems are common in the general population; ADHD and depression share 44% of those genes, which helps understand why we ADHDers have depression more often than vanillas, although clearly there are other reasons also. (We’re talking about gene variants, abnormal or ‘bad ‘ or mutated genes.  We all share the same genes, but sometimes in different flavors.)

This is new scientific evidence that ADHD can persist over life and be present in adults (If there has been any question about that?)

These genes are usually active in the second trimester of pregnancy, a crucial stage in the development of the nervous system. (ADHD is a neurodevelopmental disorder, which begins in the uterus. I don’t believe in adult onset ADHD.)

Strangely, some of the genetic variations that are risk factors in one disorder can be protective in other disorders. (ie: If gene A increases your risk of disorder X, you may be less likely to get disorder Y. Bewildering.)

Alteration in a single DNA nucleotide (SNP) explains less than a third of the genetic effect, the other 2/3 may correspond to other uncommon genetic changes (such as abnormal number of copies, et al.)

ADHD has a 75% genetic load and the other 25% is due to environmental factors. (These genes cause someone to be at increased risk for ADHD, but they might not develop it without being exposed to certain things in the environment, or they might anyway. This relates to epigenetics, where the activity of certain genes is regulated.  Almost all psychiatric disorders are related to a host of genetic risk factors; the chance of developing it increases with the number of those you have. It is a rare psychiatric disorder that is caused by one specific gene, or probably even by just a few.)

All this complicated science is making my brain hurt.

I’m plugging away at the ADHD book, but the novel keeps pulling me away from it, and then I got addicted to doing genealogy again. Still, making progress.

Brain research seems to be shifting away from specific brain regions, over to networks. I may try to explain networks soon.  The concept would be easier to explain if I understood it.

If you have a different opinion than me, or can correct my understanding, or can explain something, please comment and help us out.

The ADHD Brain in Crisis 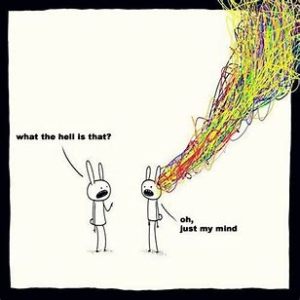 What was I saying? 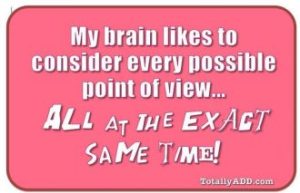 My brain, oh, my poor brain.

I am a psychiatric physician. I learned I have ADHD at age 64, and then wrote two ADHD books for adults, focusing on strategies for making your life better. I just published my first novel, Alma Means Soul. Your Life Can Be Better; strategies for adults with ADD/ADHD available at amazon.com, or smashwords.com (for e books) Living Daily With Adult ADD or ADHD: 365 Tips O the Day ( e-book). This is one tip at a time, one page at a time, at your own pace. It's meant to last a year. As a child, I was a bully. Then there was a transformation. Now I am committed to helping people instead abusing them. The Bully was published in January, 2016. It's in print or e book, on Amazon.
View all posts by doug with ADHD →
This entry was posted in add, adhd, educate yourself, educate yourself, research, science and tagged @addstrategies, @adhdstrategies, @dougmkpdp, ADD, ADD problems, ADD symptoms, ADHD, adhd book, ADHD problems, adhd research, ADHD symptoms, adult add, adult adhd, attention deficit, book, coping with ADD, coping with ADHD, coping with the quarantine, epigenetic, genes, living with ADD, living with ADHD, Problems, quarantine, research, science, scientist, scientists, strategies, strategy, studies, symptoms, tips, Your Life Can Be Better. Bookmark the permalink.