Delayed maturation, or erroneous maturation as basis for ADHD?

Like everyone else, I have my fixed ideas and opinions, and like most of us ADHDers, I have definite opinions about ADHD.

Some researchers suggest that ADHD is a delayed maturation of the brain, especially in the executive functions. (See the link below.) That might help explain why about half of the kids seem to outgrow it. But further research shows that even in those people the brain networks remain “abnormal.”

Some people would prefer the term, “different,” rather than “abnormal,” but in my opinion, if the difference occurs in less than 8% of the population and causes significant difficulties  in functioning, it is “abnormal.”   But I digress.

If it is simply a slowness of maturation, then our brain should eventually catch up and we should no longer have ADHD. And 50% of us “outgrow” it. I think for some of us, our brains have matured and we have learned coping skills and  better self-control (over impulsiveness, procrastination, jiggling, etc.) and ADHD seems to have vanished, except in research studies. ( I am not in that 50%.)

I believe the basis for ADHD is miswiring of the neural networks between the posterior and more primitive parts of the brain and the frontal lobes.  This leads to difficulty  in controlling focus  and  in controlling impulses.  And so we have the symptoms of ADHD, and we need strategies .

I would love to get your opinions on this,  especially from our more scientific readers.

Did anyone get the joke on the next to last post  or did it fly right over your heads?

Maturation and the ADD ADHD brain

Explanation of the joke, in case you still didn’t get it. Oh well, never mind.

This helps us ADHDers to focus, and also burns a few calories.

Some things help the ADHD kid in the classroom. 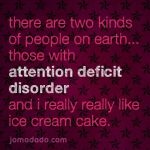 There are two kinds of people, those with ADHD and when I eat ice cream sometimes I get a headache.

Life is different, living with ADHD.

I am a psychiatric physician. I learned I have ADHD at age 64, and then wrote two ADHD books for adults, focusing on strategies for making your life better. Your Life Can Be Better; strategies for adults with ADD/ADHD available at amazon.com, or smashwords.com (for e books) Living Daily With Adult ADD or ADHD: 365 Tips O the Day ( e-book). This is one tip at a time, one page at a time, at your own pace. It's meant to last a year. As a child, I was a bully. Then there was a transformation. Now I am committed to helping people instead abusing them. The Bully was published in January, 2016. It's in print or e book, on Amazon.
View all posts by doug with ADHD →
This entry was posted in add, adhd, controversies, controversy, controversy, dysfunctions, science and tagged @addstrategies, @adhdstrategies, @dougmkpdp, ADD, ADHD, ADHD and the brain, adhd brain, adult adhd, attention, attention deficit, brain, controversy, deficit, focus, research, science, Your Life Can Be Better. Bookmark the permalink.