“The current thinking in the field is that attentional capacity and skills do occur on a    continuum or spectrum.” He also says that in general, pediatrics is evolving toward the idea of proactively supporting attentional functioning in everyone.”

I think he’s going on theory and ignoring the data, and I think he’s wrong, but there may a grain of truth.  Being “a leading pediatrician” doesn’t mean you can’t be  wrong.  Anybody remember Dr. Linus Pauling?

But Dr. Mahone seems to agree. but then says, “It doesn’t mean that diagnoses and medication aren’t helpful and appropriate in severe cases of ADHD.” And, he says, “There is strong, and growing, evidence of specific brain abnormalities associated with severe ADHD symptoms, which would lend support to the concept of ADHD as a brain disease.”

It is a little confusing.

Dimitri Christakis is a professor of pediatrics at the University of Washington and the director of the Center for Child Health, Behavior and Development at Children’s Hospital in Seattle.   The link:   All Wrong

Mark Mahone is a pediatric neuropsychologist at the Kennedy Krieger Institute for children with special needs.

There’s lot more. You need to read the article.  All Wrong

Is it a bell shaped curve or is there a big blip off to the left?  See what I mean?

I was just informed that this post is not clear.  Basically, Dr. Christakis is saying that ADHD doesn’t really exist.  I disagree.  Dr. Mahone first agrees with Dr. Christakis but then says ADHD does exist.  If you define ADHD as a set of symptoms, and then find that there are differences in the brains of people with those symptoms compared to those without, then it exists, in my and Dr. Mahone’s opinions.

Dr. Christakis says it’s just that some normal people have lower attention than others, some have higher, and most are in the middle.  It’s a bell shaped curve, like height, for example. But I suggest that people who are midgets, caused by abnormal genes, are off the height curve, and  we ADDers are off the attention curve.  We have less attention than the normal people with low attention. That’s why we are the blip beyond the lower end of the curve, off the bell shaped curve, not just normal and at the low end.

I hope that clarifies.  Now technically, it’s maybe not that we have low attention, it’s more that we have poor control of our attention, but that’s a whole nother argument. 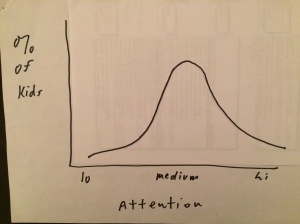 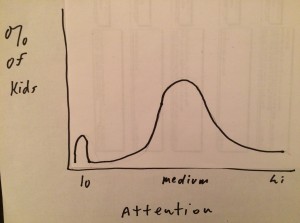 I am a psychiatric physician. I learned I have ADHD at age 64, and then wrote two ADHD books for adults, focusing on strategies for making your life better. Your Life Can Be Better; strategies for adults with ADD/ADHD available at amazon.com, or smashwords.com (for e books) Living Daily With Adult ADD or ADHD: 365 Tips O the Day ( e-book). This is one tip at a time, one page at a time, at your own pace. It's meant to last a year. As a child, I was a bully. Then there was a transformation. Now I am committed to helping people instead abusing them. The Bully was published in January, 2016. It's in print or e book, on Amazon.
View all posts by doug with ADHD →
This entry was posted in add, controversies, controversy, educate yourself, science and tagged @addstrategies, @dougmkpdp, abnormal, ADD, ADD and science, ADHD, ADHD and science, adult add, adult adhd, attention deficit, controversy, disorder, normal. Bookmark the permalink.