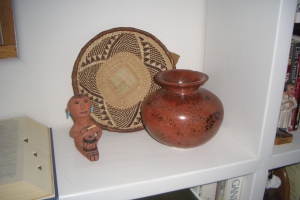 Most of my ADD or ADHD patients use Ritalin and find it very helpful.  Some need quite low doses and some quite high doses; everybody is different.  I am not using it.  When I tried it the small benefits (slightly better focus and slightly better get startedness) did not outweigh the small side effects (mild GI distress and slight jitteriness).  Probably this is partly because I already had developed a lot of strategies to deal with the problems over the years so there was not as much room for the medicine to help.

A relative of mine uses a lot of vitamins and other “natural substances” which he says has helped his ADD immensely, and I assume it has.  Although watching him it might seem simpler to just take a few Ritalin.  But some people do not like the idea of “non-natural chemicals” – which I will write more about soon.  There is a lot on the net about these alternative approaches – suggestion: be cautious about the miracle cures and the costs.

As an example of this different viewpoint, you might check out Yoly at http://mytruthseeking.wordpress.com/, who is into the alternative approach.

there is a lot of controversy about Ritalin, especially for kids.  If you look at the evidence (instead of just listening to people’s uninformed but strongly held opinions), it seems pretty clear that there are a fair number of kids on ritalin who do not need it and a fair number who need it who are not on it, probably more of the latter.  The harm done by the error is probably higher in the latter group.  In other words, the harm of omission is probably worse than the harm of commission.  But anyway, we are here to talk about adults.

I am a psychiatric physician. I learned I have ADHD at age 64, and then wrote two ADHD books for adults, focusing on strategies for making your life better. I just published my first novel, Alma Means Soul. Your Life Can Be Better; strategies for adults with ADD/ADHD available at amazon.com, or smashwords.com (for e books) Living Daily With Adult ADD or ADHD: 365 Tips O the Day ( e-book). This is one tip at a time, one page at a time, at your own pace. It's meant to last a year. As a child, I was a bully. Then there was a transformation. Now I am committed to helping people instead abusing them. The Bully was published in January, 2016. It's in print or e book, on Amazon.
View all posts by doug with ADHD →
This entry was posted in add and tagged ADD, add treatment, ADHD, adhd treatment, adult, alternative approaches to ADD, alternative approaches to ADHD, attention. Bookmark the permalink.